‘North Korea invites parody. We laugh at the excesses of the propaganda and the gullibility of the people. But consider that their indoctrination began in infancy, during the fourteen-hour days spent in factory day-care centers; that for the subsequent fifty years, every song, film, newspaper article, and billboard was designed to deify Kim Il-sung; that the country was hermetically sealed to keep out anything that might cast doubt on Kim Il-sung’s divinity. Who could possibly resist?’ ― Barbara Demick,

As you finish your staple breakfast of corn or maize porridge, you may put on your state-approved clothes, journey a 110 metres below ground, heave the great steal bomb shelter-like doors of the station shut behind you, pass the local guards standing gripped by their motionless national duties on your way and prepare to travel on line 2 of North Korea’s Pyongyang Metro (평양 지하철 P’yŏngyang Chihach’ŏl), one of the deepest underground stations in the world. This however, will be no ordinary metro ride, rather a ride through time from within the Earth’s crust as you are transported back to 1960’s China – or at least, a land that seems to much resemble it.

Some 50 years ago, China was in the throes of Maoist revolution, ancient cultural relics and literature were burning in the streets while children recited from their pocket-sized copies of Mao’s Little Red book; propaganda reaching from street to street had infiltrated itself into the minds of its citizens who lingered weak and emaciated in rice-less fields and its Maoist uniform-clad Red Guards who passionately saluted their hailed leader. A mirror to its Chinese neighbour, present-day Korea has sheltered itself from the outside world of global trade, technology, media and international human rights; North Korean leaders have eulogized themselves as deities fighting for the great Communist cause, indoctrinating 24 million with their Juche ideology. As reported in the documentary Inside North Korea, so deeply are the North Koreans blinded that upon having their sight returned following a cataract operation, their first act is to cry in gratitude before a mural of Kim II-Sung.

Yet are we too hasty to judge a country we cannot comprehend? Due to distorted agricultural yield reports from officials, it is possible that for an extensive period of time even Kim II-Sung knew nothing of the famine ravaging his nation in the mid 90’s. What’s more, state-run communist events enable social gatherings and places to meet potential partners while North Korean poverty has perhaps lessened in the capital as elite families and soldiers deemed at one with the party line are given favourable food rations, electrical goods, education or pay (some high-ranking officials have even be seen sporting $2,000 Longines watches) whilst fake Adidas from China and South Korean DVDs have reportedly been imported across the border. ‘I would prefer to do the school’s army training rather than not as having gone through a gruelling challenge I can better learn to master my emotions in other areas of my life’ explained Zhou Weiwei, one Chinese student from Sichuan obliged to participate in mandatory military training – we look on in bewilderment and pity at the communist displays of allegiance of radically socialist countries, but perhaps its participants are not as victimized as we imagine.

However, the majority of North Koreans do live below the poverty line, all media is government controlled, the purchase of a radio must be government authorised, those allowed access to televisions have only one channel and the World Food Programme report that ‘one in every three [North Korean] children remains chronically malnourished or stunted’. Beaming from household portrait to portrait, Kim II-Sung’s face glows from the badges of Korean citizens. Like the dissidents of Mao’s China, beaten, bound and executed or imprisoned in Re-education Labour Camps for such crimes as writing poetry or singing an anti-Communist song, far from being greeted with Kim’s winning smile, some claim North Koreans who attempt to trespass the southern border, procure South Korean literature or even speak highly of South Korea are deemed lawbreakers attempting crimes against the nation and they and their family face life imprisonment in one of the country’s 30 concentration camps in existence since 1948. Testimonies from camp escapees – such as Shin Dong-hyuk (whose finger was cut off by officials because he dropped a sewing machine) – describe tales of a woman forced by a prison guard to drown her own newborn and a 7-year-old beaten to death for spilling rice grains.

As we return again to Pyongyang’s Metro station, a former air-raid shelter littered with soldiers from the country’s 1.1 million strong militia who may pass through it on a daily basis, the residual taste of siege, isolation and war lingers between the station walls. Is this self-besieged land sheltering from war or preparing for it? The imagined ever-present threat of a nuclear attack lead by a million seemingly brainwashed militants has proven enough to keep the West away, but is it not high time to intervene? Are we as helpless as it seems? On Sunday mornings we flick through the paper, each week the media feeds our drama-hungry mouths a new scandal, we learn of hurricanes and plane crashes, earthquakes and dictatorships, we gasp and groan in horror at graphic images, we close the papers, finish our toast and carry on our lives; it seems we have become nothing more than passive beings plagued by indifference.

The ‘murder, enslavement, torture, imprisonment, rape, forced abortions and other sexual violence’ inflicted on a nation as described in the UN inquiry on North Korea are ‘strikingly similar‘ to the Nazis claims inquiry chairman Michael Kirby- should we stand back and watch on for fear of instigating war? Were we to witness Nazi Germany ourselves, would we – as Chamberlain before us – for the sake of our own safety, once more submit to a ‘policy of appeasement’ with regard to Germany’s ‘internal policies towards the Jewish race’? Ought we continue to submit to a ‘policy of appeasement’ with regard to North Korea’s internal policies towards its own people? If North Korea is a microcosm of 1960’s China, will it take another 50 years to equal China’s present levels of (limited) freedom and growing prosperity? How much do we really know about North Korea? If liberated from the shackles of Communism, would a capitalist North Korea truly be more free than a socialist one? Are media reports on North Korean purely run on the steam of Western European & American governmental propaganda hungry for war? Is the Western world itself indoctrinated with its own seedy culture-eroding dictatorship, where money rules as king? With a celebrity-obsessed media and a cult of celebrity worshipping, are we not ourselves somewhat brainwashed by the news we witness, are we not the proverbial pot calling the kettle black? 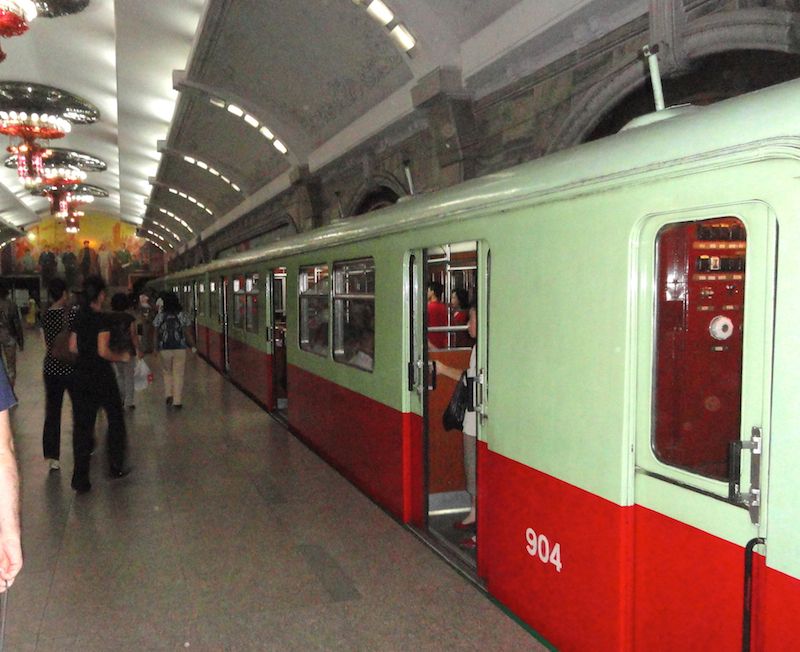 Although North Korea’s population size is half that of its southern counterpart, it boasts an army (left) of 1.1 million that is almost twice the size. Mao’s Red Army of loyal followers increased from 1000 to 12,000 in the space of just a few years. Both countries perpetuate Communist ideologies that promote the importance of nationalism and the national entity over individualism and free-thought.

1960’s China, Mao’s Great Leap forward was the largest in history with sufferers (pictured right) even turning to cannibalism & the killing of their own children in desperation- figures estimate deaths at more than 35 million. North Korea’s famine (left 4 North Korean boys lie starving in 1997) in the 1990’s wiped out more than 10 % of its population as the average citizen had no more than 100g rice per day. Both China and North Korean are societies defined by the Confucian ideals of social hierarchy, both famines were created due to miscalculations of produce brought on by this very social hierarchy and each official exaggerating produce figures for fear his superior’s wrath, it is therefore very possible that both Mao Zedong nor Kim II-Sung were unaware of starvation issues in their respective countries until it had become a critical issue. 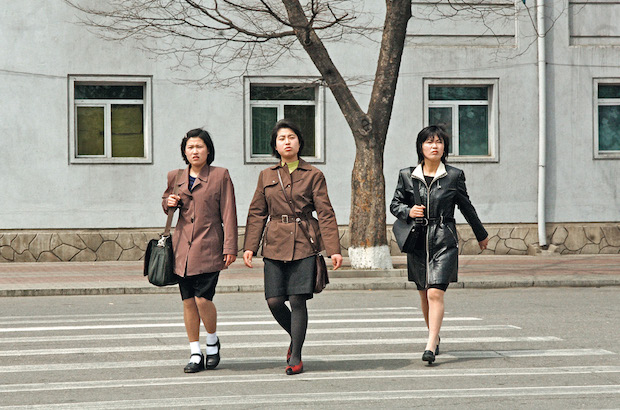 3 women walk side by side on the streets of the DPRK (Democratic People’s Republic of Korea) wealthiest city, Pyongyang- Photo by Daniel Leister 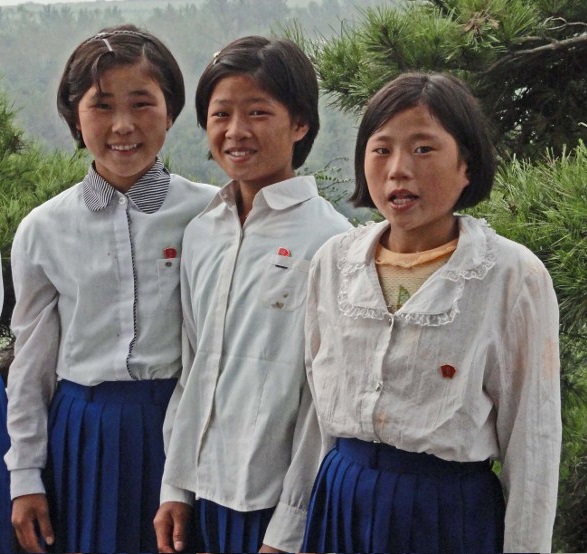 ‘ When whales fight, the shrimp’s back is broken’ so goes the Korean saying illustrating how one country may be destroyed as larger nations fight over it. Ever the proverbial shrimp – from the invasion of the Han Dynasty in 108 BC right through to the Japanese invasion commanded by Toyotomi Hideyoshi in the 16th century- North Korean nationalism is rooted in its history. 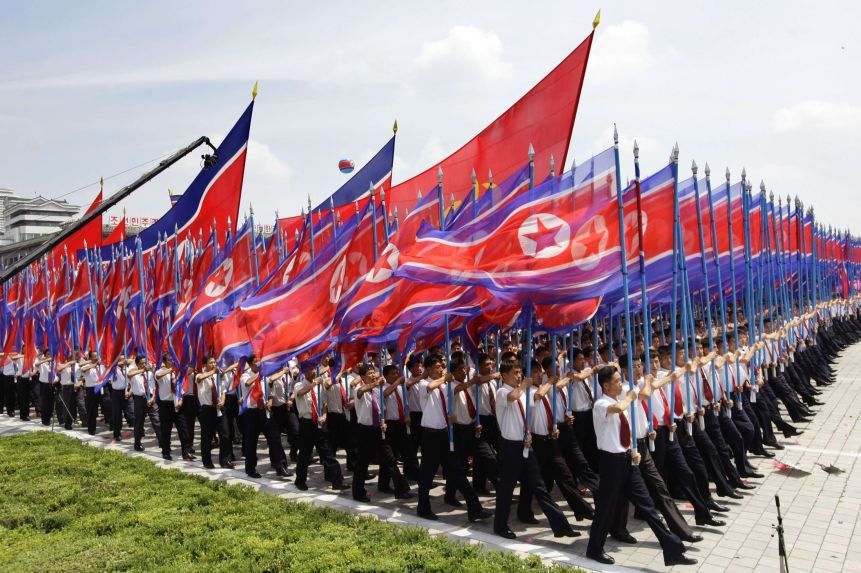 Long has North Korea been an agrarian society, the country’s first agriculturally based settlements date back as far as 6000 B.C. 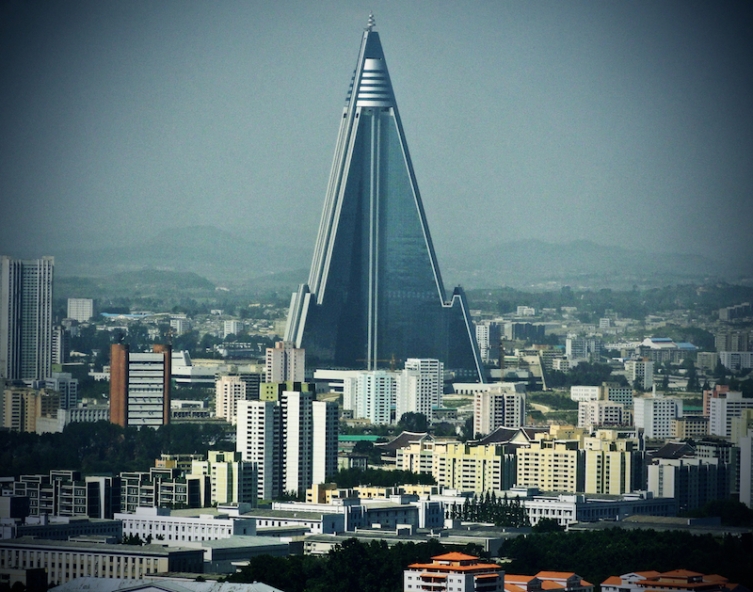 Architecture remains one of the few means of creative expression in the DPRK. Pictured here one of the world’s largest hotels, built in the country’s capital. 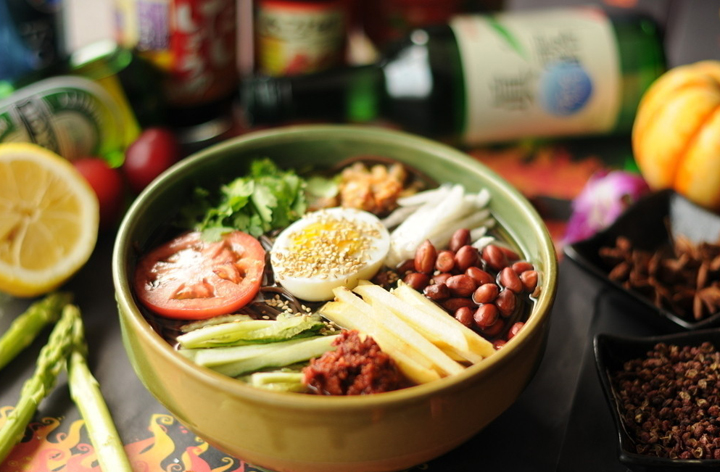 From London to Beijing, the famous North Korean cuisine is served up with gusto in restaurants across the globe.

Korea is home to many ancient artefacts dating back, some claim to be from early Korean settlers living as much as 500,000 years ago, yet similarly to the People’s Republic of China, many cultural were burnt upon creation of the Republic at the turn of the century. 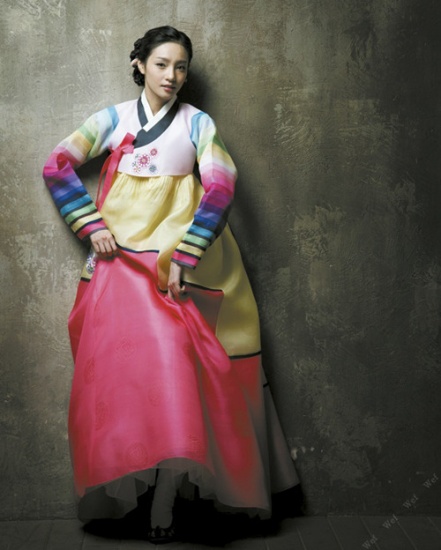 A fashion model sporting a new style of traditional Korean dress known as Hanbok (South Korea) or Chosŏn-ot (North Korea) . A fiercely nationalistic population, the traditional dress is worn to North Korean national events and weddings. North Korean weddings are usually a simple affair where cash or household items such as mirrors or rice cookers are given as gifts.

‘I thought my whole hand was going to be cut off at the wrist, so I felt thankful and grateful that it was only my finger’ – Shin Dong-hyuk, (The first prisoner ever to have escaped North Korea’s Camp 22, Hoeryong Concentration Camp)

*This weeks photos were not taken by me *

64 thoughts on “North Korea: A Modern Portrait of the Past?”