Cultural fusion of the Eastern and Western Worlds 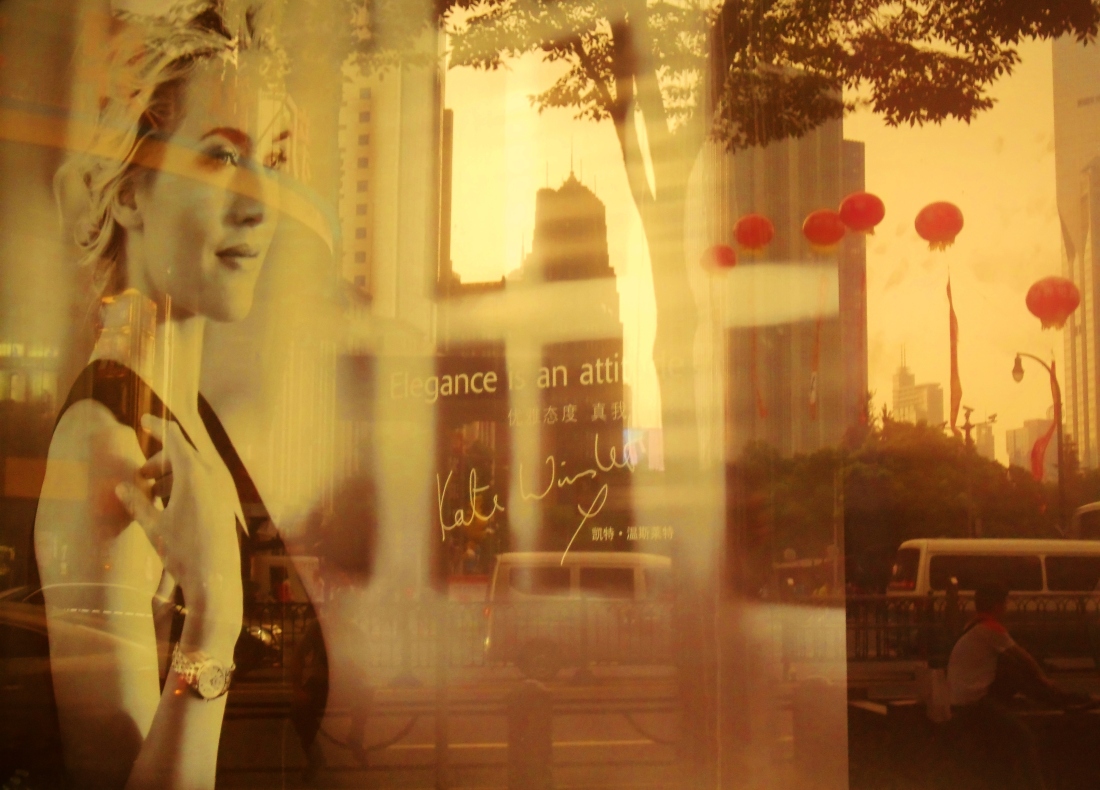 East meets west in this photo where the reflected backdrop of Shanghai‘s varied transport forms, high-rise buildings and red lanterns can be seen as sunlight falls on a Kate Winslet advertisement.

The above photo – taken in the fleeting instant when the setting sun in Shanghai reflects onto a Longines advertisement – encapsulates the changing shape of Shanghai in modern years and the curious amalgamation of western commercialism and traditional Chinese culture by which it is characterised, leading us to question just how sustainable one of China’s most booming cities is given its changeable nature. From transport, business, cuisine, architecture to art, education and fashion- the ultimate conflict of western modernity and chinese traditionalism is rampant in innumerable aspects of Shanghainese daily life.

Shanghai Baby, which is banned in China for its overt sexualism, is an engaging and award winning novel if you are intrigued by literature on the above-mentioned themes. This photo journal looks at China’s cultural development since antiquity and the following video on the tensions between Shanghai’s modern and traditional identities through art is also an interesting way to learn more. This more in-depth blog that explores the wider repercussions of the inevitable east/west conversion also offers a unique insight into the changing shape of Chinese culture. 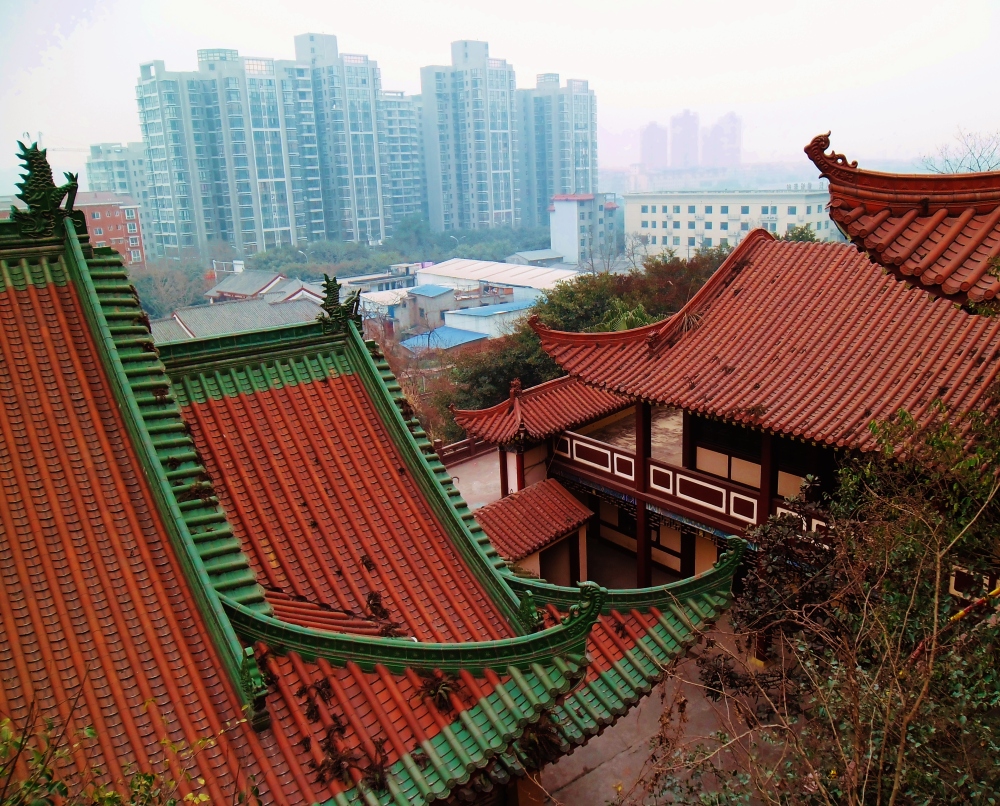 Architecture strikes a surprising balance between modern and traditional culture on the streets of Mianyang. 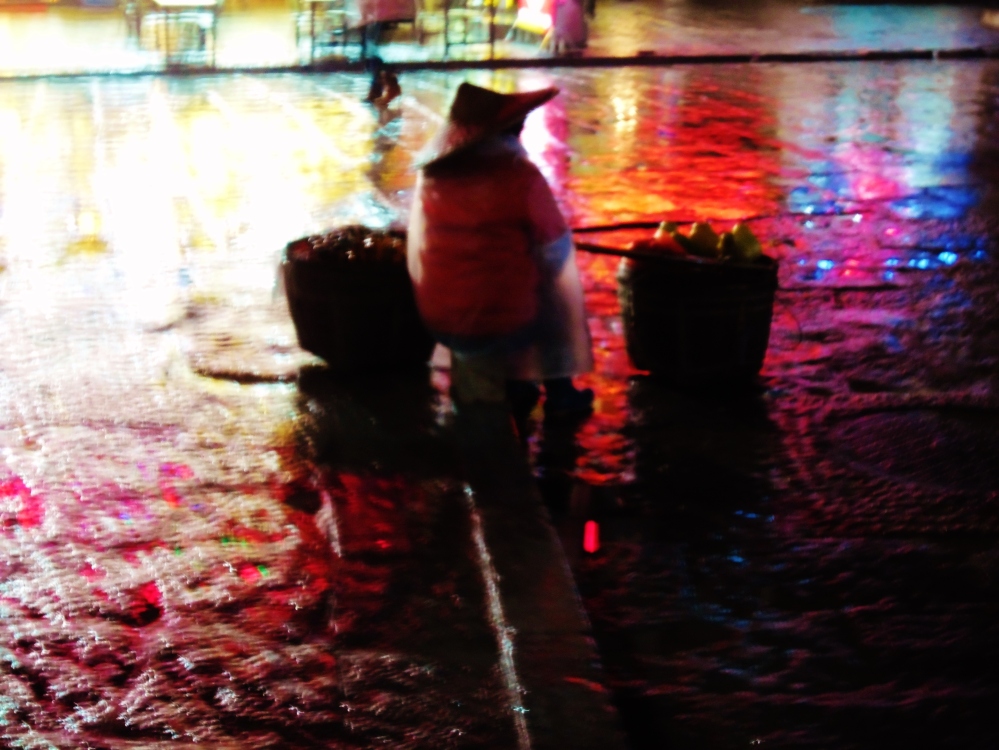 A local sells her wares in the shadow of the vibrant flashing neon lights that now line the small fishing village of Yangshuo. Hit by an influx of mass tourism in the last 10 years, Yangshuo has proven an ideal getaway destination for travellers and a money-making hot spot for Chinese entrepreneurs from urban areas able to invest in new business, yet the majority of Yangshuo locals lack the experience, foreign language skills or capital needed to undertake such a venture and find themselves without employment in a village from which they are becoming increasingly alienated. 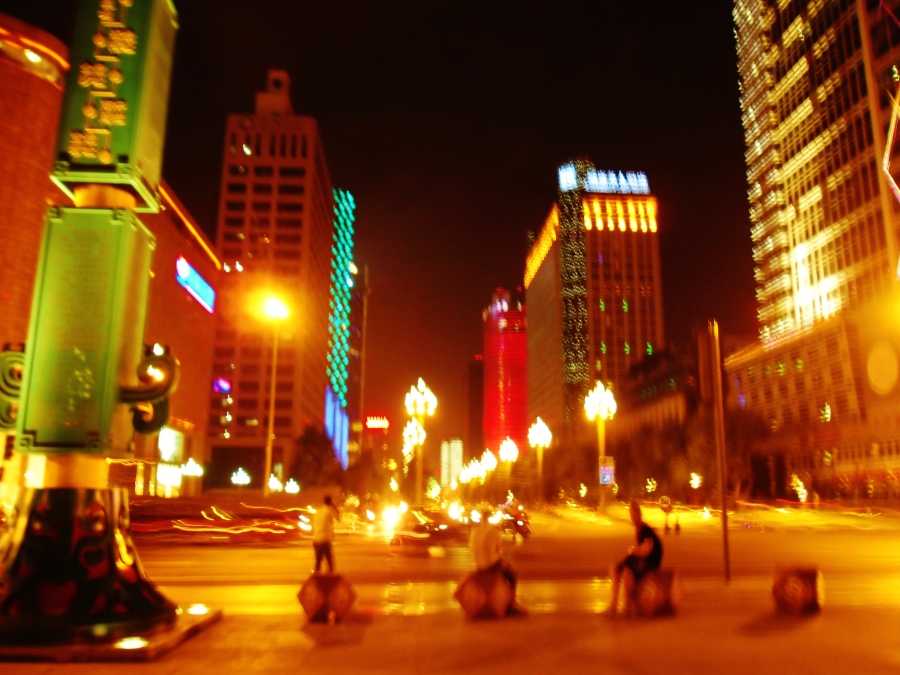 A futuristic city in the sky- skyscrapers extend far into the night in Chengdu.

An eighty year old man finds his strength in ancient Chinese tradition and displays his mastery of the martial arts on the streets of Beijing. 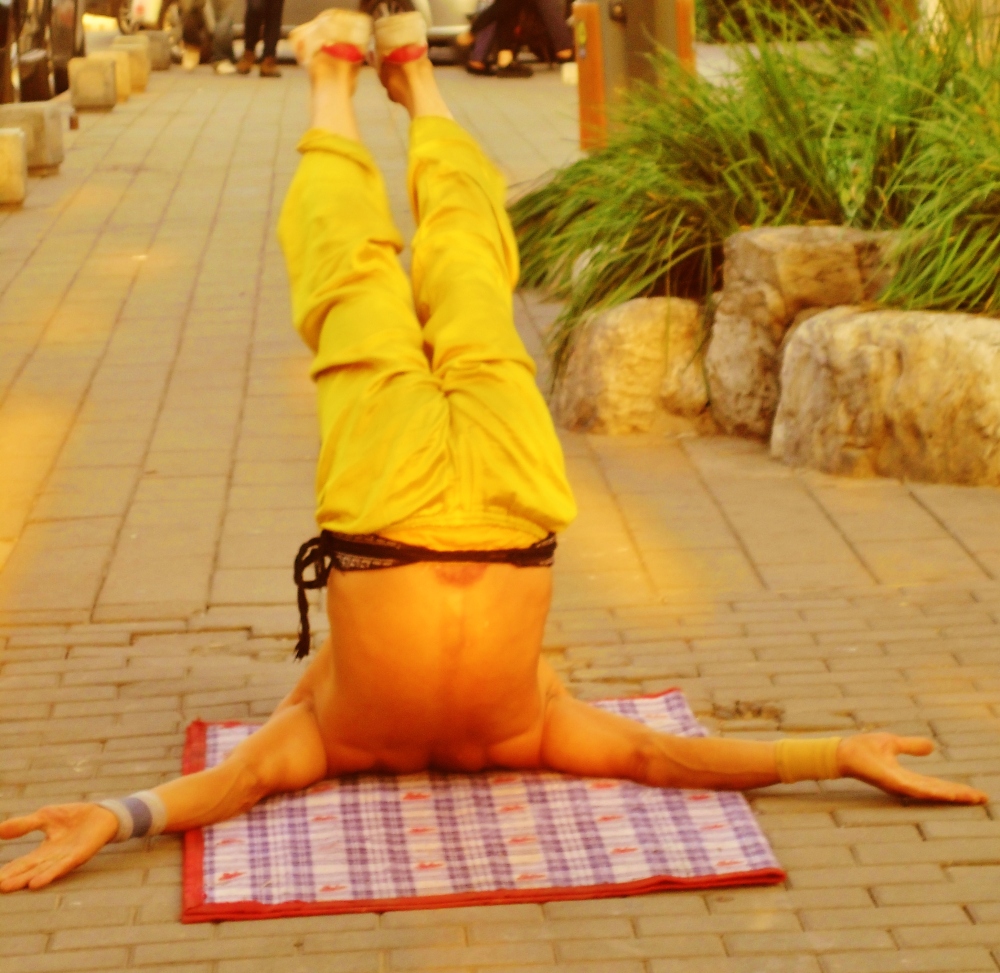 Army men and police officers patrol the crowd whilst passers by look on unphased at the heaving queues to enter the train station- a daily occurrence in the city of Chengdu that has a population of 11 million. 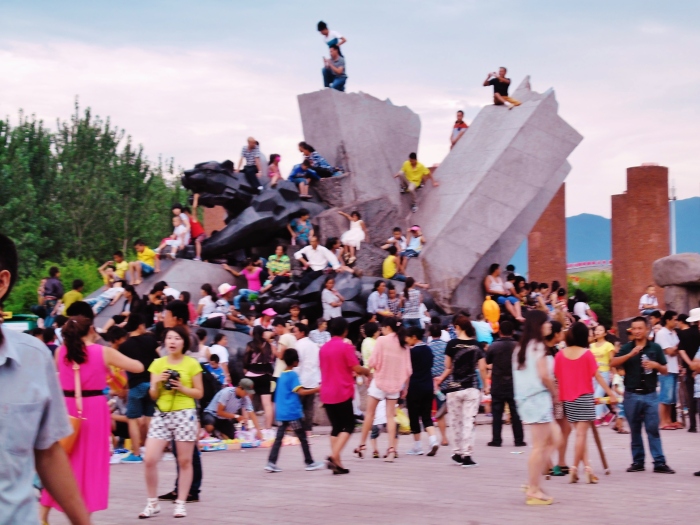 China’s Footprint in the Sky 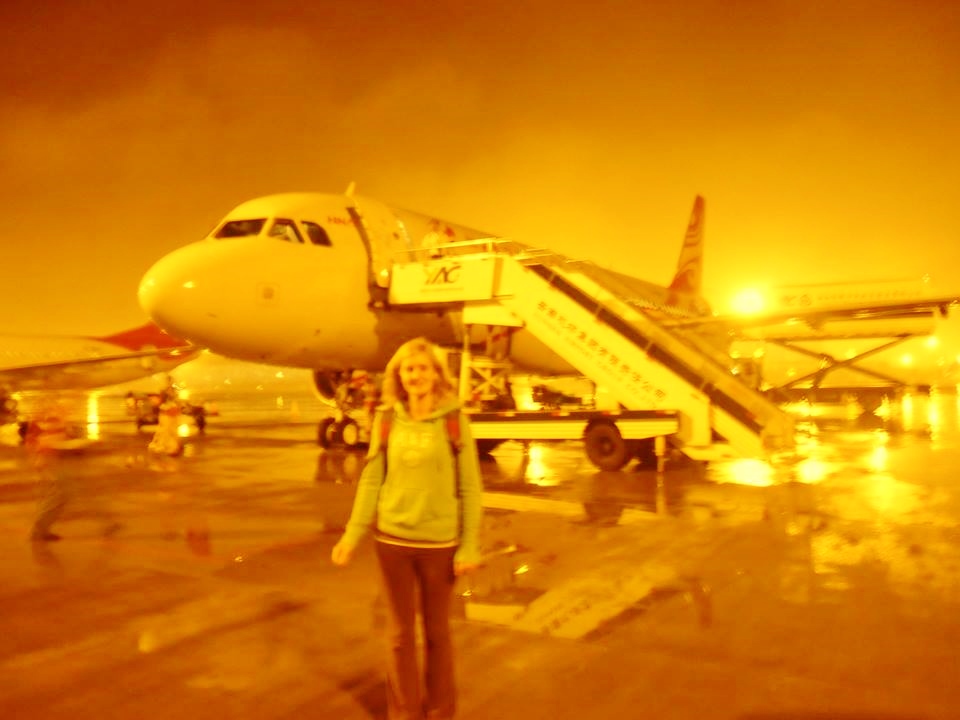 As China’s market opens up to the outside world, over-crowded skies and high carbon emissions are an increasingly large cause for concern.

‘Women hold up half the sky’ Mao famously proclaimed in an attempt to promote equality of the sexes, conjuring a vivid image that simultaneously accentuates the significance of the sky in the Chairman’s mind. As women’s rights in China increase day by day; it is time now to turn towards the neglected sky itself. As the Chinese market opens up to international trade, China is set to become the biggest global superpower and it is no surprise that its skies are becoming worryingly overcrowded with passenger flights soon to overtake even the U.S. in numbers. We all share the same sky and with more than 10,000 flights a year leaving to China from airports around the U.K. and given Heathrow expansion plans to accommodate the growing demand for Chinese air traffic, the blood -or rather pollution- is on everyone’s hands.

Small countryside villages are among some of the only places in China that remain comparatively unharmed by the fatal acid touch of China’s progressively more polluted air. 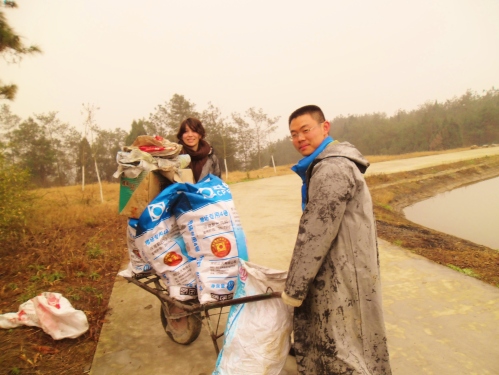 Environmental attitudes in rural China slowly begin to change as foreign nationals join forces with local villagers in Sichuan in an effort to raise awareness of eco-friendly lifestyle choices.

Recyclers begin to drive into action on the snow swept side streets of Tianjin. 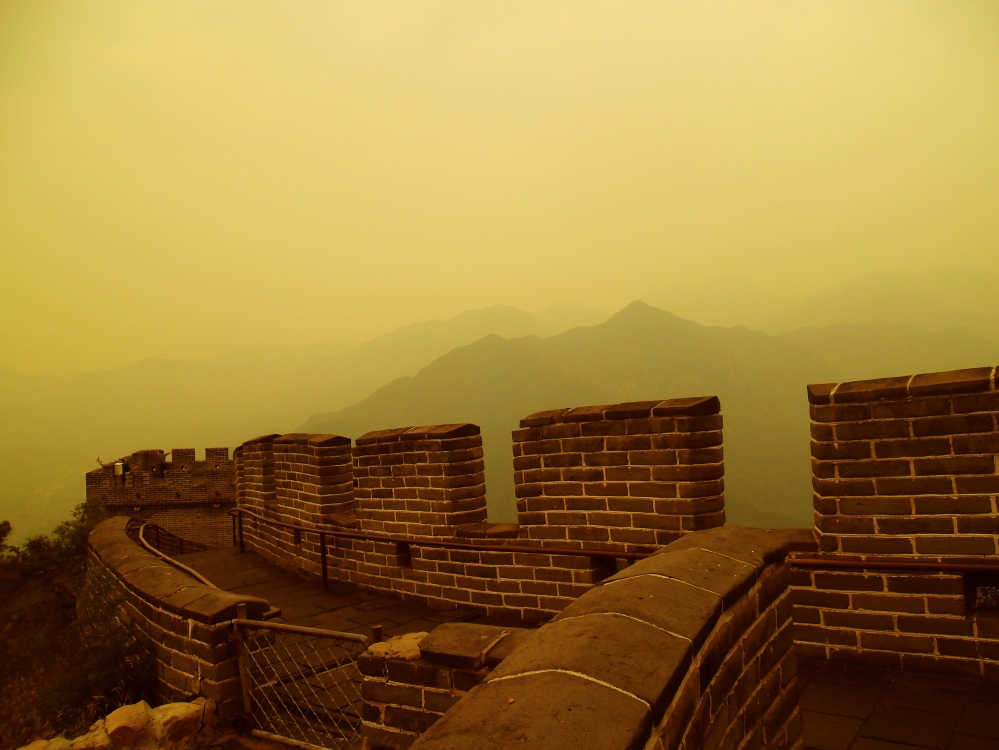 Thanks to its illustrious reputation as an impressive 2000 year old architectural structure, one of the Seven Ancient Wonders of the World and the only man-made object visible from the moon, the Great Wall of China continues to attract wide-eyed intrigue from the modern multitude who flock there in their thousands each year with holiday money, cameras and backpacks in tow.

Despite its lack of effectiveness in preventing the Mongolian invasion, no one could deny the fact that it powerfully symbolises the mighty ambition and ruthless domination of Emperor Qin Shi Huang  and that its creation was a wildly impressive feat for which many millions of workers sacrificed their lives. However, it is important to dispel certain widespread myths:

1) Although -along with several other man-made creations such as motorways and dams- visible from outer space using photographic technology, it is true that (as NASA confirms) the Great Wall of China cannot be viewed from the moon with the naked eye.

3) The Great Wall is a classical masterpiece, but it is with some dismay that many unprepared travellers discover upon purchasing their tickets to the official entrance that the remains nearby have been so heavily repaired in recent years to ensure the health and safety of the hoards of visitors burdening its rather more frail ancient skeleton, that the most frequented parts of the wall seem in fact no more ancient than the very houses in which we live.

The Great Wall of China continues to be one of the most visited locations on Earth by both Chinese and non-Chinese tourists contributing in part to China’s recently exploding economy as the government increase the number of national holidays, encouraging holiday makers to travel and freely dispense their savings on souvenirs, local cuisine and guided excursions at such scenic spots.

Despite this enlightenment of many Chinese and non-Chinese tourists, the Great Wall nonetheless does not seem to greatly disappoint or deter as tourist numbers grow year upon year and the primary objective of many still remains of course, to have undergone the experience of a famed visit to one of the world’s most well-known structures; for many, Mao Zedong’s immortal words still ring true ‘不到長城非好漢’ (‘If we fail to reach the Great Wall, we are not men’). The more adventurous of explorers seal his words under their skin and determinedly undertake intrepid expeditions and sponsored marathons along the wall in the hope of unearthing more tales behind this mythical construction steeped in history and shrouded in enigma.

China has over a billion mouths to feed; given it’s geographically isolating conditions with its surrounding deserts and vast undulating mountains barring the routes, historically it has had to learn to fend for itself and not rely heavily on imports for nourishment. Today, China remains largely dependant on itself for agricultural produce, which in large part has enabled the country to economically flourish so dramatically post-1978.

Freshly made noodles drape theatrically from the ceiling as a noodle shop owner in the town of Anren near Chengdu reclines in her chair, sheltering in the shade from the scorching mid- August heat that reaches up to 38 degrees Celsius.

The late summer sun envelopes its final billows around what remains of the golden fields as the rice harvest comes to an end in South-Western China. Sweat-soaked and exhausted from another year of battling with the earth and sky, rice farmers carry their sacks of carefully sun-dried rice grains on their backs and are rewarded with the glistening white pearl-like bounty of a harvest that will nourish their families for four seasons to come.

Chickens cluster around their cardboard home on a local farmer’s doorstep in Guilin. 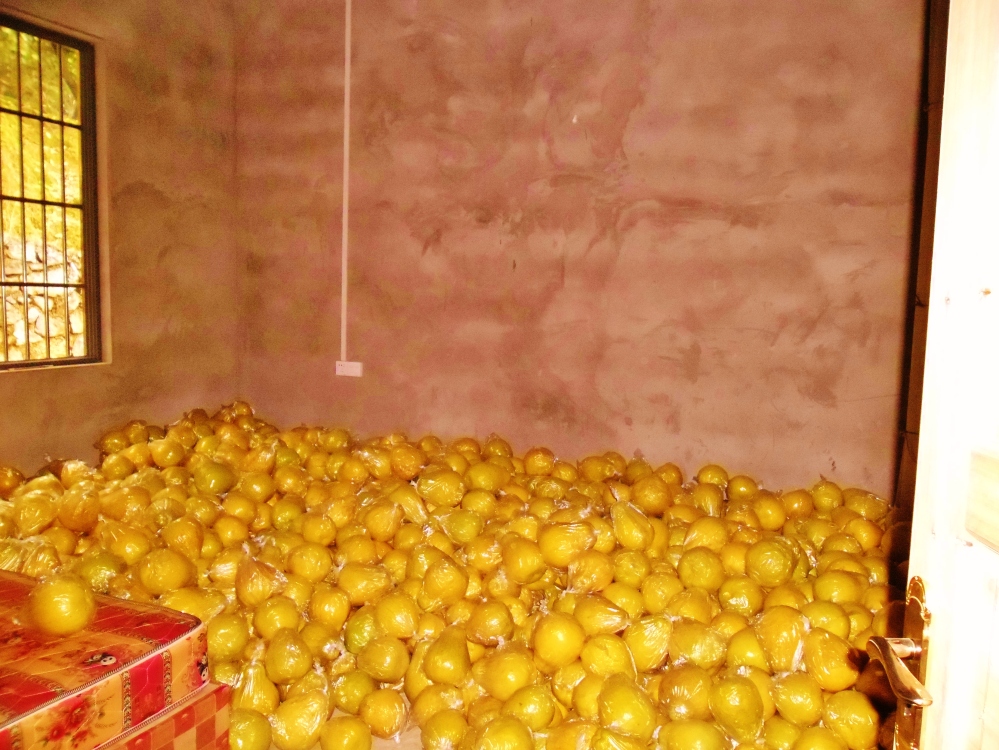 As Northern China prepares for bitterly cold winters with temperatures falling as low as -38 degrees Celsius, Guangxi Province remains sunny and cool in January when the Pomelo harvest commences.

A prize-winning giant mushroom flaunts its scarlet ribbon with pride in a shop window.

Local women out harvesting on a gentle summer’s day in the village of Baisha. 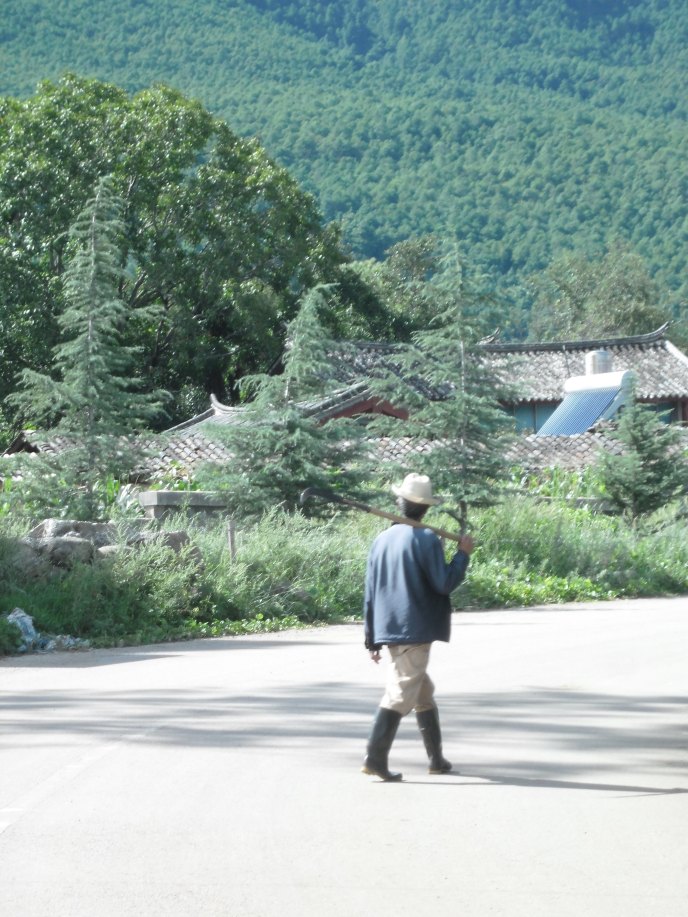 A woodcutter on the outskirts of Dongba village steps out on his homeward journey.

Have a browse of the following blogs if you want to find out about all things oriental! Overpopulation, The cultural Frontier, China: Photography Blog, Life After China, Biddle Writes, The Great Call of China, Lost in China, China Finance and The Best Architecture Photos of the Year.