A mountain seller’s stall in the Jade Village of Southern China’s Yunan.

Grey cauldron-like containers churn and bubble tempestuously, the waft of freshly stewed dog meat wades through nose hairs, goats bleat wildly before restaurants, beheaded crabs are flung onto their still live counterparts as skewered rats and squirrels plunge before one’s eyes. From cockroaches to sheep’s brain served straight from the skull – as if having fallen into the inner workings of a butcher’s twisted kaleidoscope – to the wandering westerner, many Chinese delicacies seem somewhat alien and ill-favoured.

Indeed, with pregnant mink and foxes beaten and skinned alive, 100 tons of fish lying dead in the rivers of Guangxi province and approximately 100,000 dogs killed during the annual ‘Lychee Dog Meat festival’ in Yulin, this culture seems fathomless and unmerciful. Yet perceptions alter as culture ripples across the oceans, the patterns of man evolve understandably from land to land. Whilst in the west the dog is heralded as ‘a gentleman’, in the east he is conceived as a lowly despicable creature, for as the Chinese proverb goes ‘How can you expect to find ivory in a dog’s mouth?’ (狗嘴里吐不出象牙), to kill a dog therefore is no worse than to kill a hog- of which the British slaughter more than 8 million each year.

What makes a dog nobler than a chicken? Why is a cat purer in soul than a cow? Do we unwittingly save only those pleasing to the human eye? Is a cannibal more comprehensible if he eats only the ugly? Perhaps the absolutist eyes of a foreigner are blinded to the cruelty of his own culture, perhaps it is man we ought look down on with disdain, rather than channeling our contempt onto a nation, for be it the puffins in sauce of Icelandic cuisine, the British and their bacon or the Kujira Tataki (whale meat) of the Japanese, each nation is culpable in its own unique way – the only race at fault is the human race.

Is an animal’s destiny tied to its tongue? Had a learned puffin perfected Icelandic or a linguistic pig mastered English, would they have escaped the dinner plate? Why does the reasoning human continue to trend towards behaviour so inhumane and unreasonable in terms of animal treatment? With his lofty claim to superiority to the animal kingdom as the only reasoning animal, why then does man not reason far enough to cast aside the conventional food chain? The human is nature’s greatest predator- are our carnivorous tendencies rather one of our most natural basic human instincts? Is a world without meat physically possible and truly desirable, or a dystopia of human undernourishment and animal overabundance due to food chain imbalances?

As the largest producer of fur in the world, should more be done to hinder the Chinese in their efforts in the domain of animal slaughter? Why are animals treated with so little mercy in Asian countries? Has Asian animal mistreatment been unfairly distorted by Western media, exacerbating racial tension between nations and cultures?

Xiao Huang was chained to his owners’ garden for 10 years leaving him to grow violent, aggressive and too wild for human interaction. Given the danger to the family’s young children, Xiao Huang needed to be disposed of- popular options in China include selling dogs to local restaurants or abandoning them in rural areas. After the relatives had eventually vetoed the restaurant option, Xiao Huang was to be taken to roam the streets of another village, yet removing him from a home he had not left in 10 years proved to be quite a feat. Eventually he was attached to an electric scooter on a lead, but despite moving inextricably forward, so intent was he on looking back on the home he had not once left since he was a puppy, that his leg became injured during the journey. He was tied up and fed his last meal from the family before being abandoned in an area far enough from his former home that he would be unable to return. 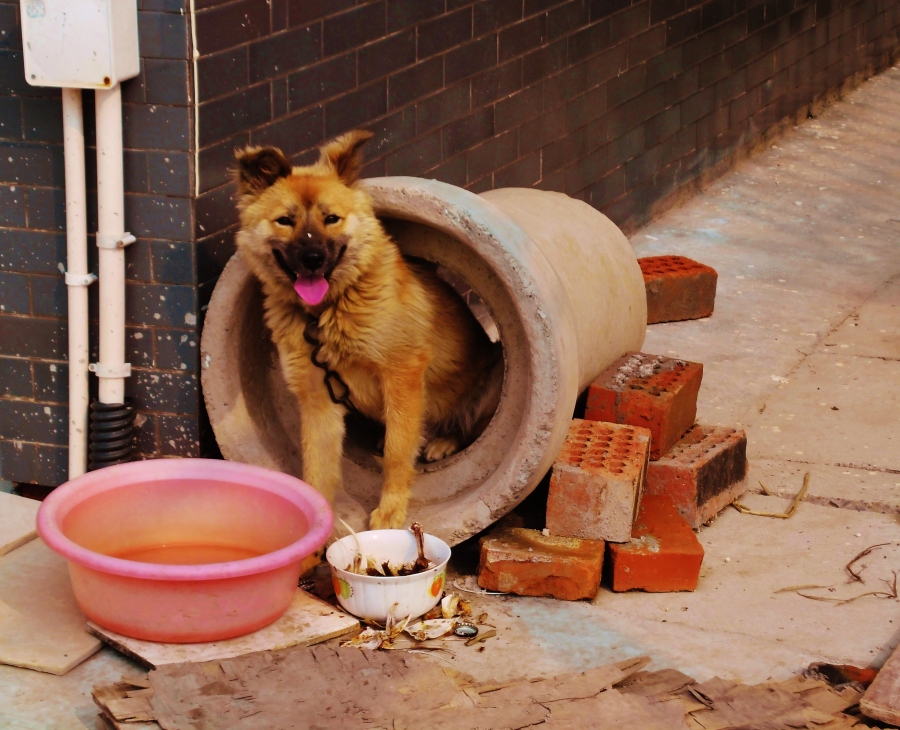 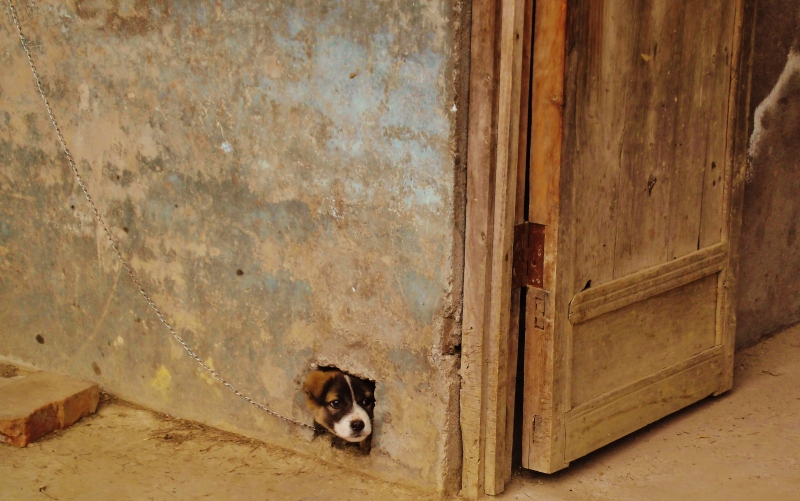 One pampered dog revels lazily in the sunshine on the doorstep of his owner’s handmade-scarf shop.

It’s not all abattoirs and animal oppression – another fine day of taking in the mountainous scenery, eating grass and mulling over the philosophy of existence comes to a close for local cows in the town of Baisha who are accompanied on their daily journey home by their local farmer.

Whilst cows in the south plod on into the sunset, far off on the other side of China’s vast land surface in northern Tianjin, as always, mountain goats rush downhill with glee as their farmer walks serenely in their wake.

Some pigs and their farmer in Transit across the Dragon Rice Terraces of Guangxi.

A beekeeper near Panshan mountain cares serenely for his miniature honey makers in the sun.

Bird cages hang from the trees of parks around the cities on Sunday mornings as pensioners gather for weekly reunions- keeping birds in ornate bamboo cages is a common pastime in China for the retired, for whom small birds are a much sought after companion to loneliness. 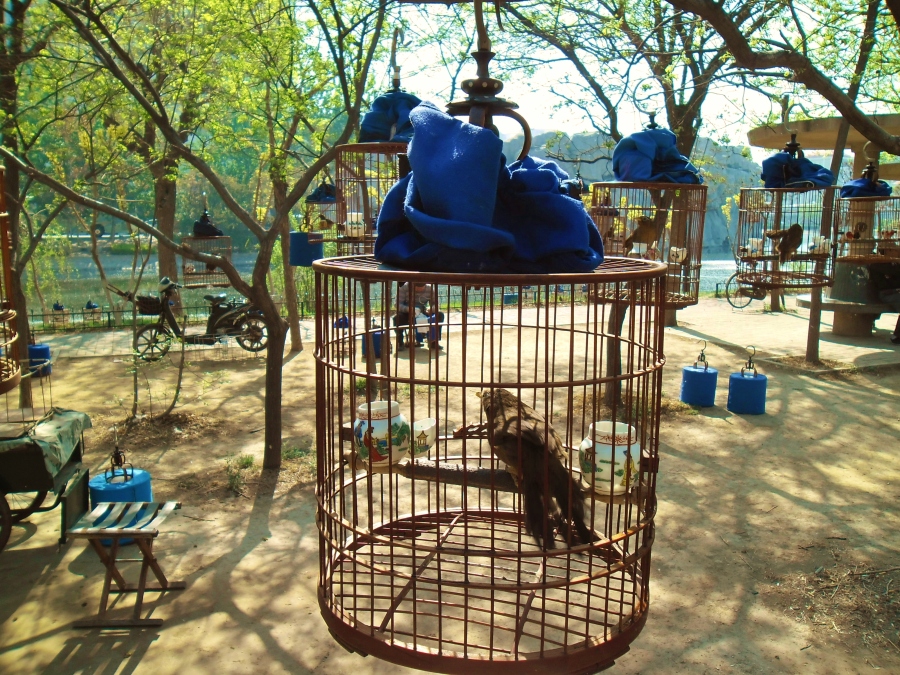 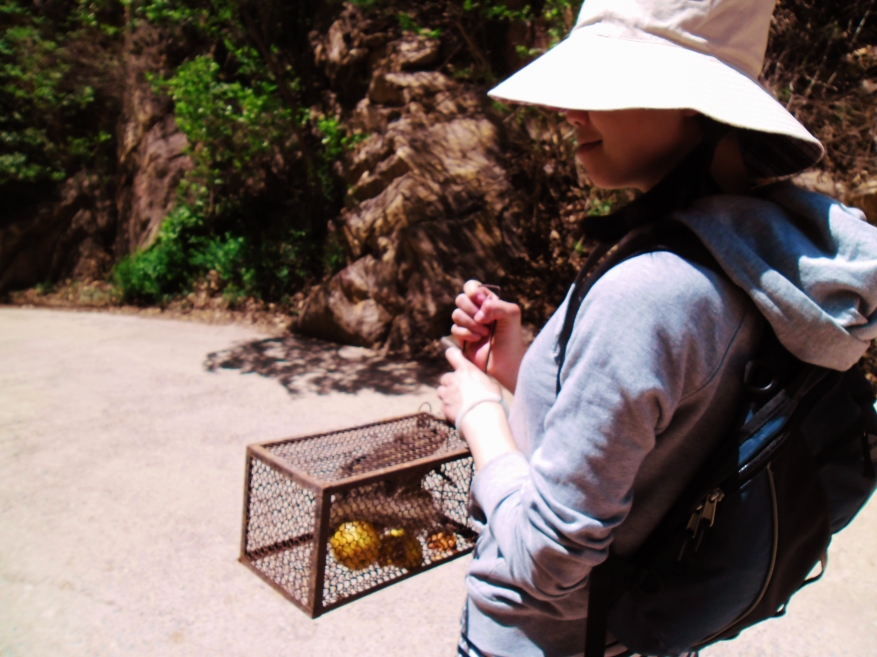 A squirrell sold as a snack by a hillside stall seller is bought and set free into the wilderness by a visiting buddhist wandering the mountains. 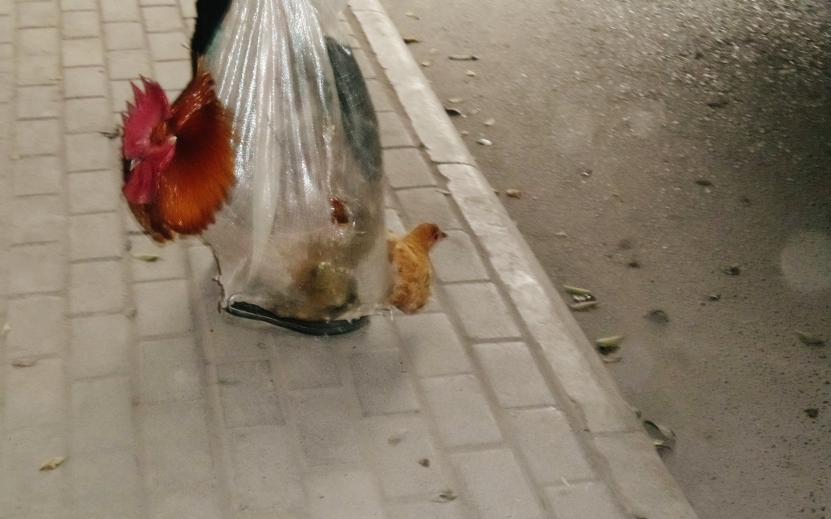 A lady awaits at the bus stop with her shopping purchases in hand as she begins preparations from the most important meal of the year – Chinese New Year dinner.

Don’t possess your own transport? Take your dinner home live and kicking on your local bus instead. 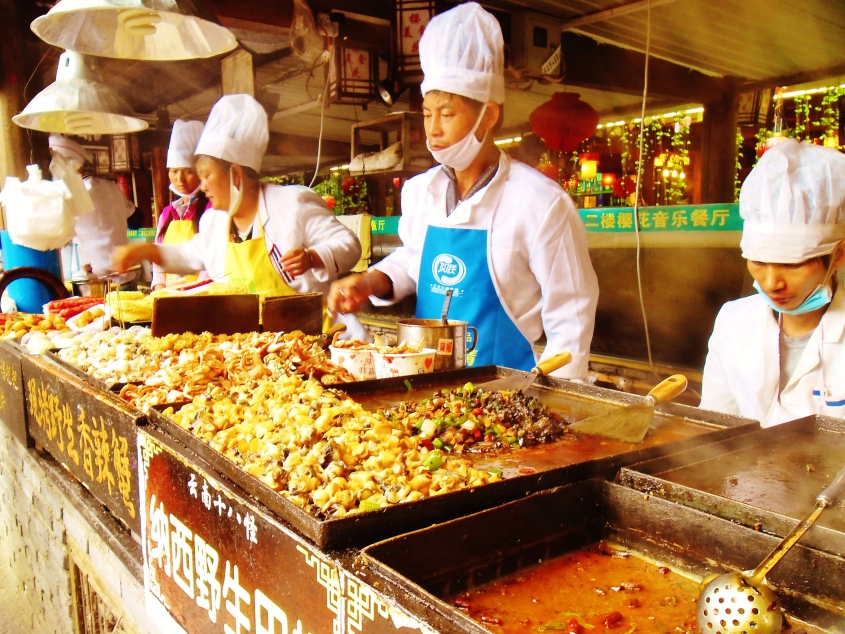 China’s thriving meat industry continues to provide millions of jobs each year and many believe has given Chinese cuisine its global culinary supremacy.

From chicken feet to duck brain, Chinese delicacies are served up in style by successful cuisiniers passing from town to town.